Only a short ferry journey from Fowey and easily accessible by foot, car and bike, the ancient fishing village of Polruan is a must-visit during your stay in Fowey. Perched on the other side of the estuary with Pont Creek to the north, the Fowey River to the west and the English Channel to the south, the village is a picturesque destination with some fantastic views from all angles. Read on to discover what to do over the river…

Polruan is connected to Fowey by the Polruan Ferry, running every day of the year apart from Christmas Day, with a varying schedule for winter and summer services. The crossing is £2 per adult and bicycles are an additional £1, with the first ferry starting at 7.15am on weekdays. From Fowey, the ferry departs from the Town Quay or the Whitehouse slipway depending on the tides, but always departs from and arrives at Polruan Quay. Be sure to check the timetable and keep up to date with any changes to the route here.

There are some fantastic walks for visitors to explore the village and soak up the views and breathtaking sights around Polruan. An easily accessible and signposted route is Hall Walk, a three mile excursion to Bodinnick which is littered with beautiful and historic landmarks. Beginning at Polruan Quay, the route takes walkers up the hill and along Pont Creek, past the ‘Q’ memorial which was built in memory of the writer Sir Arthur QuillerCouch, with an opportunity to see Ferryside, the former home of Daphne du Maurier and where she wrote her first book, The Loving Spirit. Keep an eye out for Hall Manor too, a family home which was built above Bodinnick in the 13th century. Standing at the very top of Polruan Hill stands St Saviour’s Ruin, the remains of St Saviour’s Chapel, which dates back to the 8th century, substantially pre-dating any other churches in the local area. The chapel was built on a site first occupied by St Ruan, after whom Polruan is named, and the building would have been both a recognisable landmark for ships and a good lookout point over the harbour for any potential threats.

Polruan hosts its own regatta weekend, which is usually held on the last weekend of August, a week after the annual Fowey Royal Regatta. The event provides some great entertainment for locals and visitors, with live music, a carnival procession raising donations for charity, stalls selling a variety of goods, and the yearly ‘tennis ball rolling competition’, during which over a thousand numbered balls will be rolled down the main street. Participants will be allocated a number and if their ball is the first to reach the quay the prize is theirs.

Seek out Lantic Bay, a picture-perfect cove that wouldn’t look out of place on a postcard. The beach is located west along the coastline of Polruan and is technically made up of two beaches: Little Lantic and Great Lantic. At low tide you can walk between them but they become separate coves as the tide rises, with a few further secluded coves to the western end which are easily accessible at low tide. If visiting, keep an eye on the incoming tide to avoid getting cut off. 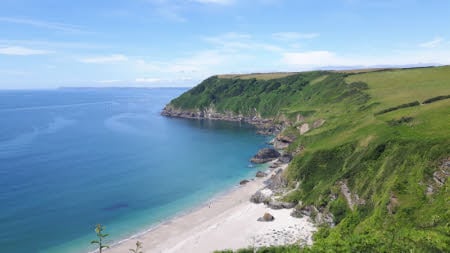 To book your stay with us and explore Polruan, call 01726 833302 or go to www.theoldquayhouse.com