We received fantastic press coverage from some great publications during 2018. Our general manager, Julio, and head chef, Richard, were interviewed for a feature in Food Magazine’s January edition. Described as ‘Fowey’s fine dining duo’, Julio and Richard talked about how they were taking our restaurant’s credentials to new heights. 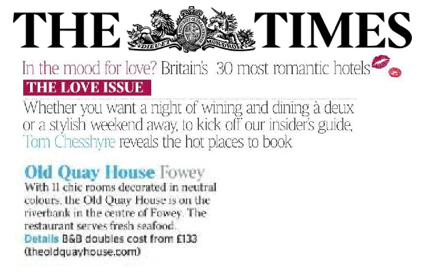 The Old Quay House appeared in The Times in February as part of a round up of the 30 most romantic hotels in Britain. The hotel was included in the Evening Standard’s round up of the 15 best hotels in Cornwall. The Old Quay House was described as ‘boutique refuge’ with ‘elegant bedrooms’ and a ‘scenic waterfront restaurant’. Coast Magazine featured us as part of a round up of Cornish restaurants with sea views, describing the hotel as ‘enchanting’. Country Style visited The Old Quay House as part of a trip to Cornwall, and said that our ‘blissful refuge’ will ‘gently nudge away any and all remaining stresses you forgot to leave in the city’. The Old Quay House was included in The Caterer in July complimenting our ‘stellar location’ and ‘fabulous food’.